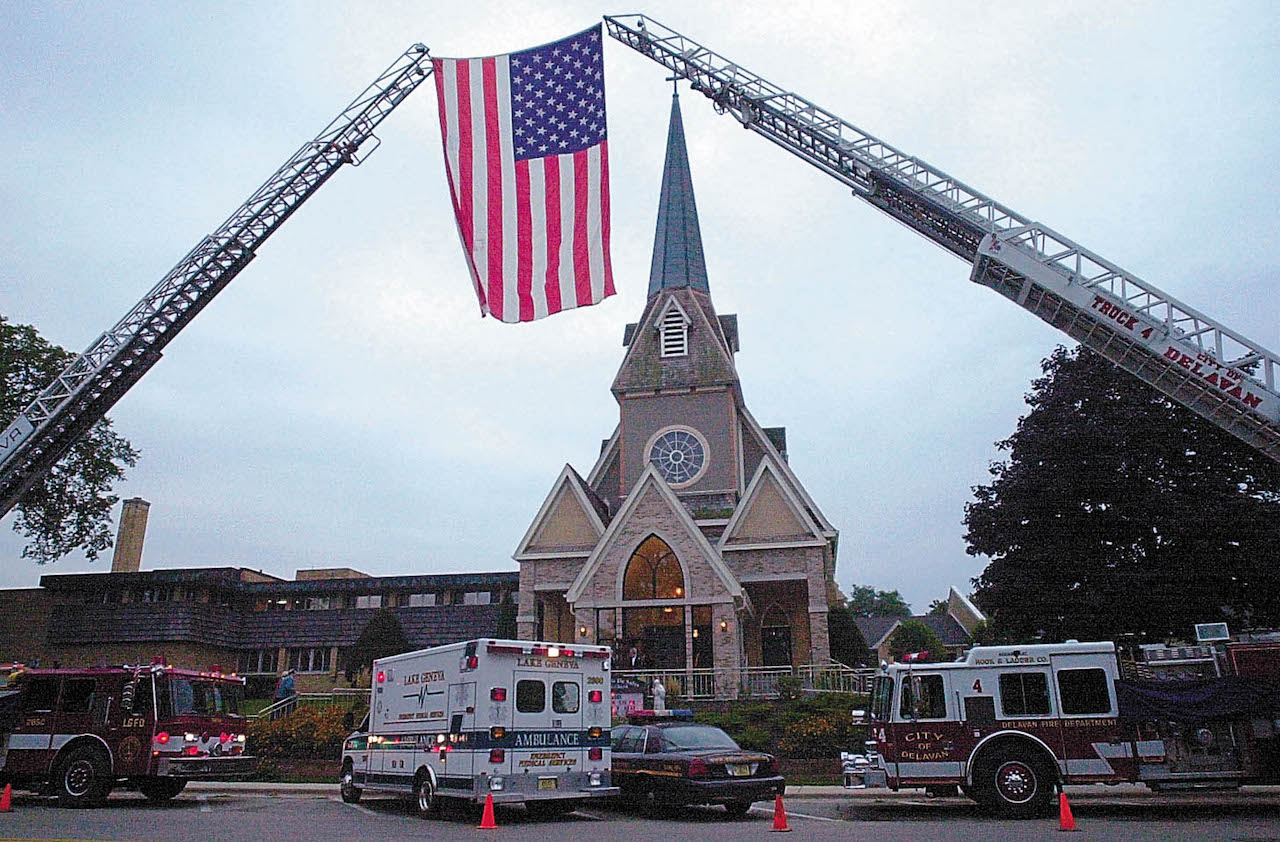 Local first responders raise a U.S. flag outside of a memorial service Sept. 17, 2001 at St. Francis De Sales Church in Lake Geneva to honor those killed in the Sept. 11 terrorist attacks. Photo by Terry Mayer.

This story was first published in The Week, Walworth County’s weekly newspaper, on Sept. 12, 2001

WILLIAMS BAY — With little else to do as a proper response to the deadly attacks on the World Trade Center and the Pentagon, Williams Bay Rescue Chief Rob Way walked outside the morning of Sept. 11, 2001 and lowered the large flag that flies over the fire station to half staff.

Way stood below the flag with assistant rescue Teddy Manasco talking about the enormity of the tragedy, just like other groups of people in homes, factories and offices throughout the county.

Their thoughts were of the rescue personnel who had responded to the World Trade Center and who were inside the buildings when they collapsed.

“We constantly drill for disasters,” Menasco said. “But there’s no way anybody could plan for something like this.”

Way found the whole scene incredible. “When I turned on the TV this morning, I thought it was a replay of the Trade Center bombing of a few years ago,” he said.

But he had always wondered if something of this magnitude could happen. “I’m not so much surprised as much as devastated,” he said.

In Elkhorn, students at Gateway Technical Institute milled about a big screen TV set up in the break area. “I should really go to class,” Dan Fox said as he sat riveted to the screen. His friend Nicholas Welch sat nearby. “I think it’s pretty insane,” he said.

Ripples from the deadliest terrorist attack in U.S. history spread across the entire nation on that Tuesday, affecting local travelers and commuters as well.

Precautions taken in downtown Chicago were affecting airports and resorts in Walworth County.

As a precaution, most buildings in downtown Chicago were ordered to evacuate following the crashes by two airliners into the World Trade Center. The move forced commuters to scramble to get out of downtown.

The first train back to Harvard from downtown Chicago arrived at 11:50 a.m., and at least one more was expected before the regularly scheduled 1:18 arrival, according to the ticket agent at the Harvard depot.

Amy Goeldner, who works for an investment firm in a building next to the Sears Tower, was on the first return train to stop in Harvard carrying commuters from downtown Chicago.

Workers in her office had been sent home for the day, so she decided to go to her place near Whitewater Lake to meet her fiancé.

“I got off the train to work at about 8:15 when I heard about the plane hitting the World Trade Center,” Goeldner said. Shortly after, officials decided to evacuate the Sears Tower—the second tallest building in the world, and the largest in the United States—fearing it could make an attractive target for possible terrorist actions.

“When they closed the Sears Tower, they told us we could go home too,” Goeldner said. “Then a little while later they closed our building.”

Another commuter on the train said that he had taken the 7:34 train out of Harvard headed for downtown Chicago and hadn’t heard anything about the attack. “When the doors opened in Chicago, a wall of people were coming straight at me.”

That’s when he heard most buildings in downtown Chicago had been closed, so he turned around and headed back into the train for the ride back to Harvard.

Back on the train, commuters gathered around a small portable television set that one of the passengers had to watch the news unfold. Those on the train said that usually people are staring straight ahead, lost in their own thoughts.

On this day, they looked at each other and talked about the tragedy.

Travel concerns had a wide effect throughout the county. Anna Hausing of Over Land Aviation in East Troy said that the FAA had ordered the East Troy airport closed until further notice.

“We had two planes leave this morning before we closed,” Hausing said. “One of them came back right away. The other one must have been diverted.”

They had one planned arrival this morning, but that was canceled.

The airstrip at the Grand Geneva Resort in Lake Geneva normally isn’t open until the weekend, so the FAA action had no affect on air traffic.

Inside the hotel was another matter however. Geri Simandl, marketing director at Grand Geneva said they were busy trying to accommodate guests whose flights from O’Hare had been canceled.

“We’ve got a couple of groups trying to get out, so we’re trying to accommodate them as best we can.”

By the end of the day, all that Americans could do here and across the country was to stop, pray and try to make sense of what had just happened.

This story was first published in The Week, Walworth County’s weekly newspaper, on Sept. 12, 2001