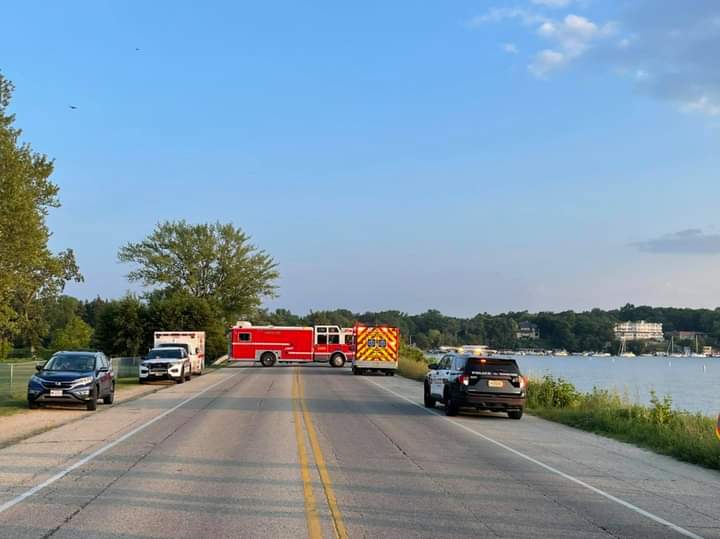 LAKE GENEVA — An Illinois man drowned Sunday while trying to help rescue one of his children from the water.

According to the Geneva Lake Law Enforcement Agency, City of Lake Geneva Communications Center received several 911 calls about 7 p.m. Sunday of a possible drowning in the Town of Linn near Big Foot Beach on Geneva Lake.

Geneva Lake Police, along with Town of Linn, City of Lake Geneva, Village of Fontana, Williams Bay Fire and Rescue units responded along with Water Safety Patrol.  A MABAS Water Rescue alarm was activated.  Units from Southeast Wisconsin and Northern Illinois responded to assist in the rescue/recovery operations.

Geneva Lake Police arrived at approximately 7:06 PM, finding passengers in a 2000 17’ Tracker boat in a panic saying that their father/husband was missing in the water, according to a news release.

Authorities say Antonio F. Delasancha Jr. age 31, from Elgin Illinois was operating the boat, pulling his 2 pre-teen daughters on a tube.  One daughter fell off the tube and Mr. Delasancha turned around to pick her up.  When the boat stopped to pick up his daughter, Mr. Delasancha’s 11-year-old son jumped into the water to swim.  Mr. Delasancha son was wearing a PFD (Personal Floatation Device).   The son started to drift away from the boat and began to struggle.  Mr. Delasancha jumped in the water without a PFD to assist his son.  While swimming toward his son, he went under the surface and drown in approximately 45 feet of water.

Initial rescue efforts were stopped after approximately 40 minutes. A recovery operation began utilizing sonar technology.  At approximately 11:45 PM, Mr. Delasancha was located, and his location was marked.  Recovery was not attempted due to safety concerns at that time.

On Monday, August 2, 2021 the Walworth County Sheriff’s Office Dive Team was deployed.  Mr. Delasancha was recovered at approximately 8:30 AM.

LAKE GENEVA — Rescue crews were called to Geneva Lake late Sunday evening for what authorities are calling a possible drowning.

The Lake Geneva Fire Department was on scene along with Linn Fire and multiple other agencies with a report of a drowning.

Emergency crews were staging near Big Foot Beach State Park, according to a Facebook post from the Lake Geneva Fire Department.

No additional information has been released.

The incident comes about two weeks after another drowning on the lake that happened near William’s Bay.