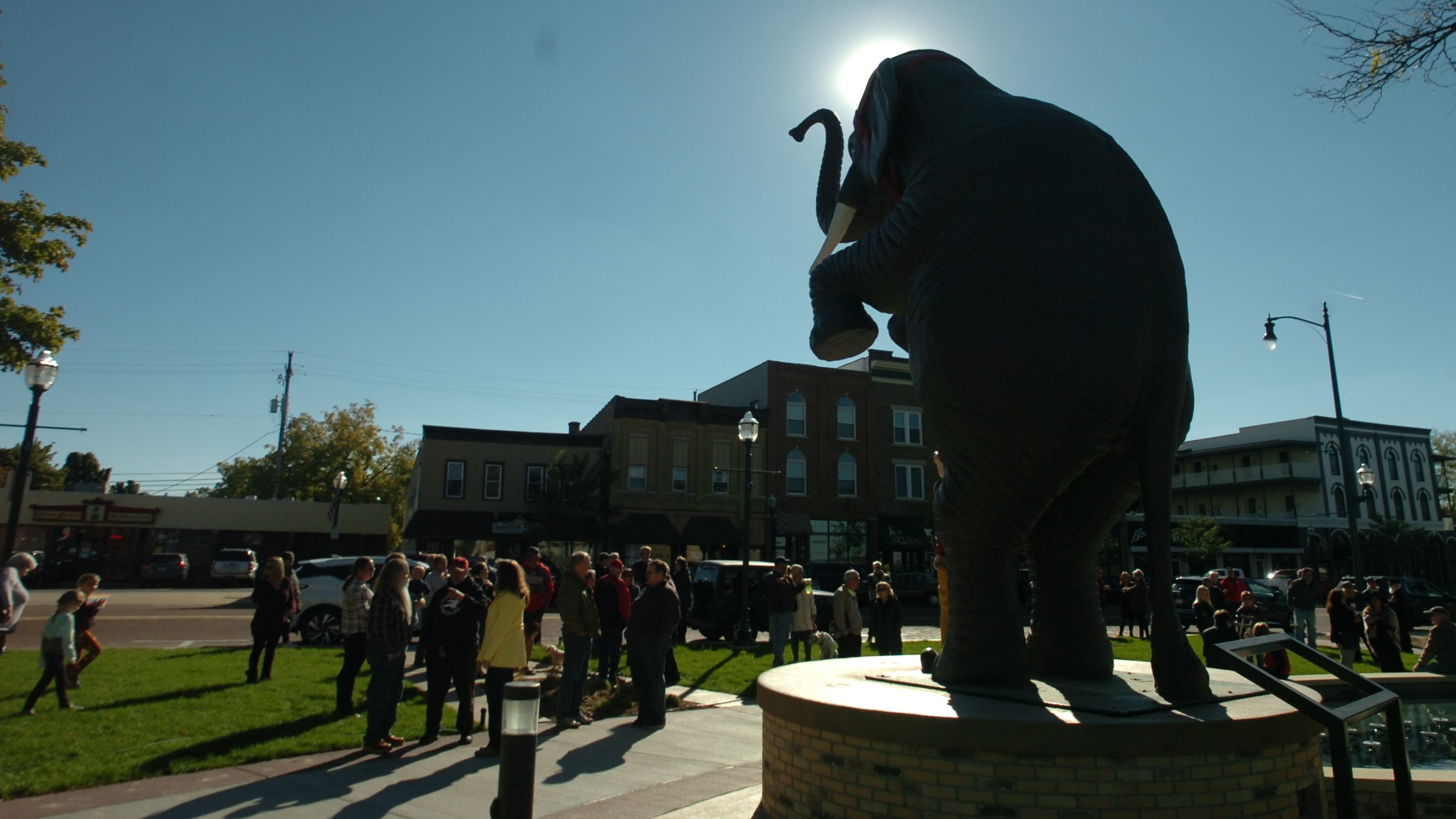 A ribbon cutting was held Saturday at the newly redone Tower Park in Delavan. Dan Plutchak/WCCN

DELAVAN — Romeo the elephant looked down quite satisfied Saturday with his surroundings in the newly rededicated Tower Park in downtown Delavan.

About 80 people gathered on a sunny afternoon for the ribbon cutting to dedicate the new park that has coincided with a resurgence in business development downtown.

During a ribbon cutting ceremony Saturday, Delavan Mayor Ryan Schroeder said the park symbolized the commitment from the city to reinvest and rebrand itself, just as others have invested in the community.

“We have a host of other businesses and individuals that chose Delavan. They could have gone anywhere, but they chose to come here during some of the hardest times that any of us have ever faced,” Schroeder said.

As part of the ceremony, two time capsules were installed in bases of the two statues that are the prominent features of the park.

One time capsule from the school district was installed in the base of the giraffe and will be opened in 50 years.

Delavan-Darien School District administrator Jill Sorbie said the box contains items such as writing from some of the students, photos, drawings, yearbooks, a current copy of the Delavan Enterprise and other items that students would be proud to open in 2021.

The box also will contain a mask, the most visible symbol of the pandemic that has had such a significant impact on today’s students.

The other time capsule from the Delavan Historical Society will be installed in the base of Romeo and will be opened 100 years from now in 2121.

Photos of the restoration, photos of current downtown storefronts, memorabilia from the Clown Hall of Fame and books about Delavan’s history are included, according to Michelle Jacobs.

Angus-Young worked with the City of Delavan and teamed with R.H. Batterman to move the project through design, approval and to completion.

Existing signature features, such as the circus giraffe and elephant statues, are now more integrated into the park fabric.

The statue of Romeo retained its prominent location in the park. It is a facsimile of the noted Mabie Circus elephant that was part of the circus that wintered in Delavan between 1854 and 1865.

Two new interactive water fountains have been added to each end of the park. They include colored light and music.

And as visitors mingled after the ceremony and the mayor posed below Romeo for a family photo, one of Delavan’s landmark features is ready for visitors for years to come.